IE7 one year on

Today is the launch of Leopard, Apple's latest version of the OSX operating system. With it comes Safari 3, a product that almost a year on from the launch of Vista highlights the stagnant performance of Internet Explorer 7.

When Microsoft launched Vista on 30th November 2006 there was rejoicing amongst the web community at the arrival of a near standards compliant browser in Internet Explorer 7. With the browser shipping with Vista by default and IE7 being pushed to existing users as an update there was a great deal of hope that IE7 would quickly take market share.

But the operating system has not been as popular as hoped with sites springing up claiming it is rubbish and vendors like Dabs even offering PCs with XP rather than the newer Vista.

As a result of the low impact of Vista, IE7 is struggling to gain market share, hovering around 20%, whilst Firefox is now becoming a major player in the market with 35%. 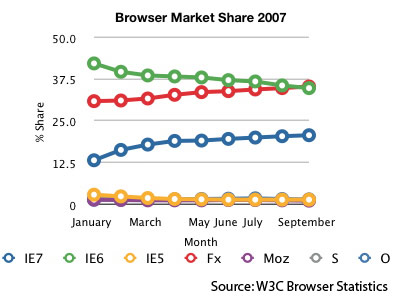 I’m not a partisan Apple fan but Leopard will be an interesting release to compare to Vista. Like Microsoft Vista, Apple have released a new version of Safari with the new OS. Apple are claiming it to be the fastest rendering browser in the market. That remains to be seen but what is certain is that CSS support is way ahead of IE7. With the forthcoming release of Firefox 3, IE7 is already looking outdated even before it has had a chance to take a foothold.

I would love to see IE7 more widely used - Microsoft is still the dominant OS after all and IE7 offers the chance for a near standards-compliant browser to replace IE6. It is almost a year after the release of Vista now and IE7 market share is stagnating. Safari 3 raises the bar again and Firefox 3 is bound to eat into Microsoft’s market share more and more.

What do you think? Why has IE7 adoption been so slow?