Google Pixel isn't a strategy. It is a vanity project.

Google's play for the top end of the smartphone market looks more of a vanity project than a sound strategy. In a saturated market full of consumer fatigue it would have been better to expand the mid-market range.

No doubt that tech journalists in San Francisco will lap this up and we’ll see some great reviews on YouTube and the tech press. Yes the hardware looks very good and with stock Android the experience will likely be good too.

But at a time when the smartphone market is becoming more saturated it seems worth exploring some data against the play to end the Nexus line of affordable good quality smartphones (the Nexus 5X retails for around £250 here in the UK) and move for the top end of the market with a phone starting at £600.

The market context for all smartphone manufacturers (and Google is now one) is that smartphone sales are now slowing. Apple is seeing declining iPhone sales and the first decline in revenue in thirteen years. The chart below from Statista show the trend for Apple in millions of units. Sure they are still selling a lot but the trend is downwards. 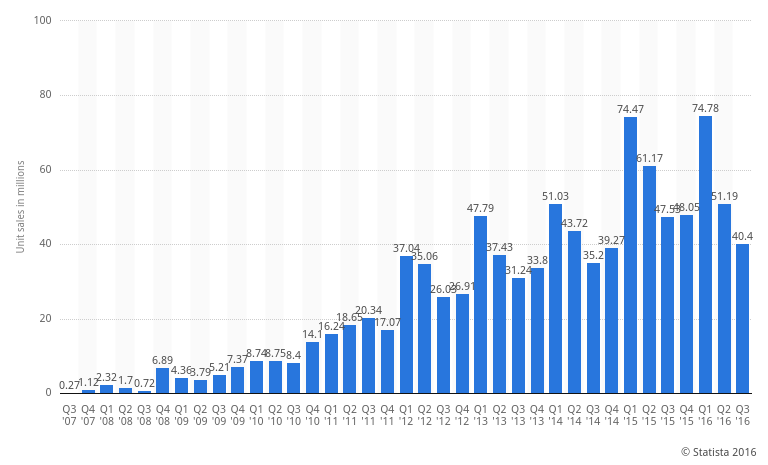 Whilst some analysts argue that sales are slowing because of economic conditions and a slowdown in China, there is an equal argument that the market has reached saturation. Research from Canalys shows that for the first time ever Smartphone shipments are falling. 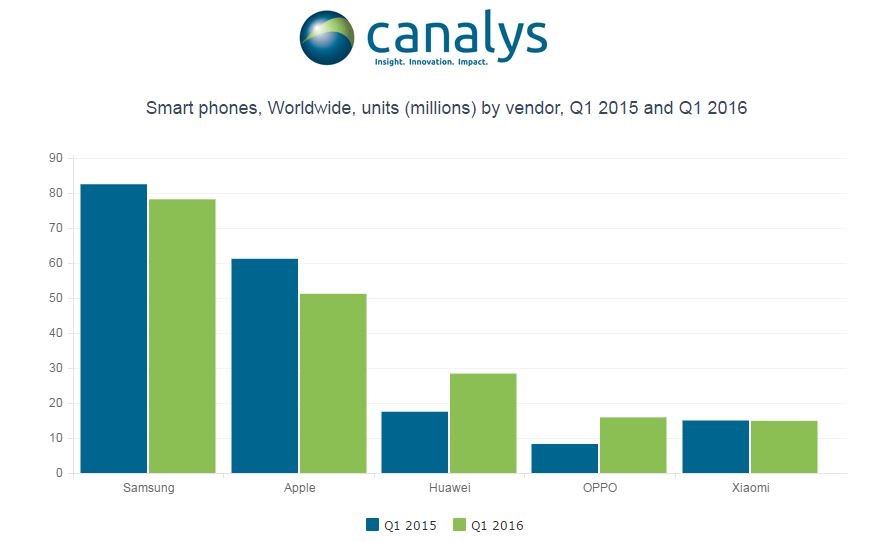 Particularly at the top end of the market to sell new phones each release must represent something hugely compelling for consumers to buy it. When upgrades include a slightly faster camera or a marginally better processor it is a no-brainer to stick with what you have got. Furthermore with new competition coming from manufacturers like Huawai and Xiaomi price becomes more sensitive.

We must compete with Apple!

The Pixel seems like a board room statement that Google must compete with Apple in the top end of the smartphone market. Perhaps the strategy is just to stay in the game but the price point is extremely high and it also seems risky.

Consumer trend data shows that the market is spending less on phones and that consumer demand for smartphones is dropping. Google are entering the market right at the time the market is showing that people are buying phones less frequently and the mid-market is growing. With the Nexus line Google had a perfect play to exploit that and get more consumers onto their platform.

Pricing from a different era

The Pixel looks like a solid top end phone but it seems totally at odds with how consumers are behaving in the market. It might keep Google’s board and tech journalists in San Francisco happy but my suspicion is that the market will continue to opt for high quality mid-range phones over a top-end phone whose pricing seems to come from a totally different era.

There are times when corporations make strange decisions in relation to competitors both in product releases and acquisitions. From any perspective in relation to market data this looks like a vanity project from Google.