Google Chrome - no pulse racing but it is fast

Last week Google launched a new web browser Google Chrome. Built to facilitate the next generation of web applications the browser is an exciting newcomer to the market that wins on performance and features but looks like 'my first web browser'.

Google Chrome uses WebKit the rendering engine that powers Safari. This is perhaps surprising given that Google funds around 85% of Mozilla’s Firefox revenue. Quite why Chrome does not use the Gecko rendering engine isn’t made explicit, but I suspect memory usage was the reason. Google have also open sourced Chrome. This is a definite strength of the project and it is encouraging to see Google’s approach in releasing this software.

There is one feature that has obviously received a great deal of attention - performance. For modern JavaScript intensive websites this is a breath of fresh air. Who owns the biggest JavaScript intensive websites? Google of course. Using GMail or Google Reader is impressively fast. In fact you might go as far as to say that this browser was designed for just these kind of sites and it shows.

Jon Resig has completed as series of performance tests on the JavaScript engine concluding that this is fantastic news for users and application developers.

It was reasonably predictable that Chrome should work very well but not really get the heart racing on the design front. Jon Hicks noted that it looks like a Fisher Price Browser. I agree that it does have the ring of “My First Browser”, but as you use Chrome there are some very nice touches. Contextual elements like the Status Bar, that only appears when it is relevant. I’ve long thought that Browser UI could use contextual elements more and this is a great little feature.

The ability to search directly in the address bar is nothing new - you can do this in Opera, but nonetheless it is an excellent feature. It reduces the clutter from the UI and is an elegant solution.

The most visted feature is something that seems to have been largely inspired by Opera, and many like Ben Ward have expressed frustration that Google has claimed this as as innovation. Regardless of credit for the innovation it is a great feature and is of real value to the user. 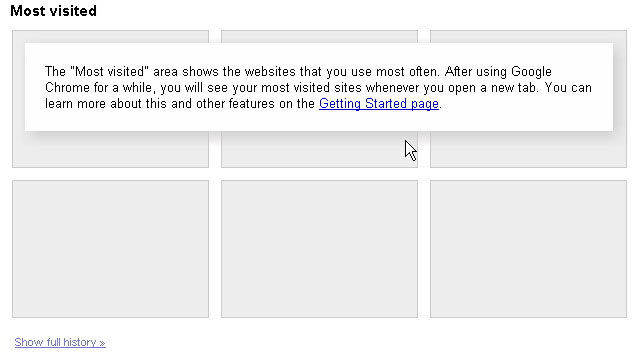 The UI as a whole is disappointing but it works. Function has triumphed over form. This is consistent with Google’s design approach and it would seem to be a design philosophy that is working. I can accept the argument that a browser should be largely invisible and if people do not notice it then it has entirely succeeded. I would have liked a bit more excitement though!

Let’s not forget that Internet Explorer 8 is just around the corner. To date, a bizarre market has emerged in desktop computing where the worst product has the biggest market share. Because Internet Explorer is tethered to Windows it has been the market leader for quite some time. Firefox has steadily chipped away at this market share as users have realised that Firefox offers greater stability, security and performance. Others like Opera have continued to produce excellent products but lacked penetration.

The release of Chrome must be hugely demoralising for the IE8 team who are working hard to get up to speed with the rest of the market. The initial betas have been encouraging but it would seem that Microsoft just cannot compete with the speed of open source projects and now Google’s Chrome. I have stated before that I am not anti-Microsoft - I would just like to see the best product have the biggest market share. I hope the release of Chrome will allow the browser market to become more transparent and let users understand they have a choice in the browser that they use. By all accounts Google is already seeing a good uptake even during Beta.

Chrome is a positive step forward for the average user’s experience of the internet. If users can experience the web in a safer, faster way and developers have more opportunities to build bigger and better applications based on open standards then it can only be a good thing. What I am really looking for though is a fix for the browser market in general. It makes me deeply uneasy that Internet Explorer has such large market share when it is an underperforming product. If Google’s Chrome can go some way to resolving this paradox I for one welcome its arrival.